How well do different drinks really hydrate you?

How Well do Different Drinks Really Hydrate You? 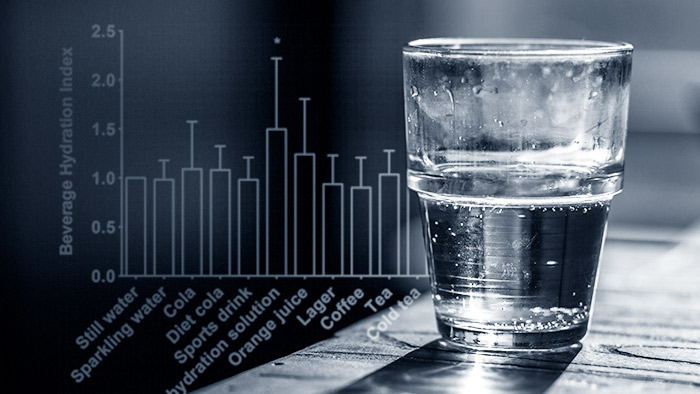 How well different types of drinks are retained in the body is a question I get a fair bit, and it’s of some practical use. In theory, the longer you can keep the fluids you drink onboard the greater the chance they have of being absorbed into the bloodstream and used effectively in the body. There’s also the side benefit of less interruptions for bathroom breaks, which is useful during training and competing.
Whilst you’re inevitably going to pee out a good proportion of all the liquid that passes your lips, all drinks are definitely not treated equally by the body in this particular regard. Substances like caffeine and alcohol have the potential to increase urine output and reduce fluid retention, whilst calories and electrolytes in drinks can slow the emptying rate of the stomach and positively influence the absorption of fluid from the gut into the bloodstream.
Most of the factors affecting how your body processes various drinks have been studied pretty extensively. However, until very recently no one had actually put a range of different, commonly consumed beverages into a controlled ‘head to head’ situation to compare their potential to hydrate. Earlier this year, a respected group of UK scientists published a paper that compared the hydrating potential of the following drinks1.

How the Study Was Conducted

The study compared how well each of the drinks were retained in the two to four hours immediately after consumption. Volunteers downed one litre of fluid and then had their urine output monitored to indicate how much had been retained. Then, to create a straightforward comparison of the drinks, each beverage was given a BHI (Beverage Hydration Index) score. Still water was used as the reference point in the scale with a rating of 1. So, if a drink ended up with a BHI of 1.3 it would mean that 30 percent more of it was retained in the body two hours after consumption than when drinking the same amount of water and so on.

What the Results Showed 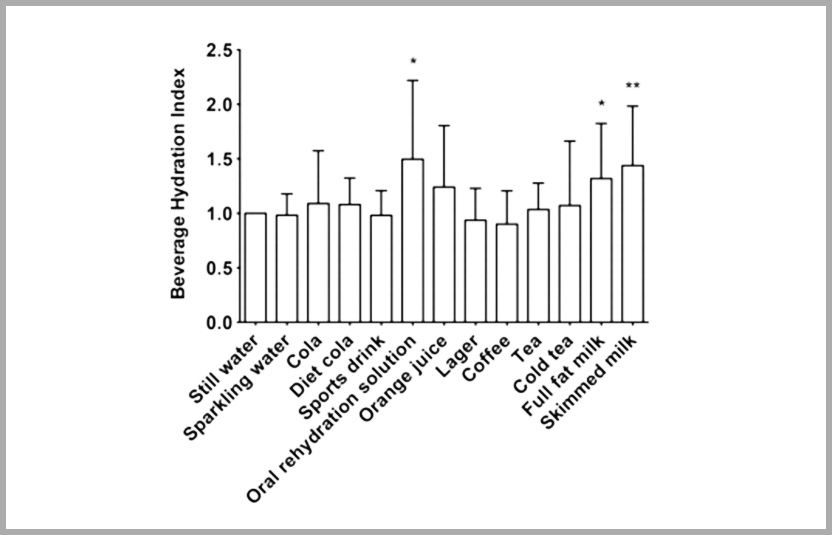 There were a few interesting conclusions that came out of the data. Here are four insights that stood out for me.

Whilst most of the findings of this study are essentially in line with ‘common knowledge’, the data does reinforce and quantify the anecdotal evidence in this area. It also helps to dispel some myths about certain drinks being dehydrating, at least when they’re consumed in moderation. For myself, the main take home points are:

What the Paper Doesn’t Tell Us

Something that the paper perhaps doesn’t shed much light on is the impact of how consuming certain foods and drinks together might affect fluid retention and urine output. It’s rare that we take on fluids in isolation and on an empty stomach, as was the case in the study.
It doesn’t take a great leap of imagination to reach the conclusion that taking in some calories and/or salts in food alongside water is likely to result in increased retention of fluid when compared with drinking fluids alone. To be fair to the researchers, they were seeking to control as many variables as possible to look solely at the properties of each of the drinks. Introducing the interactions of food and fluid together would have made things extremely complicated.
This study clears up some misinformation and gives you real science behind how different fluids affect your body. Now you can make more informed decisions about what you drink before, during, and after training and racing to optimize your performance.
References

Andy Blow has a few top 10 Ironman and 70.3 finishes and an Xterra World Age Group title to his name. He founded Precision Hydration to help athletes solve their hydration issues. He has a degree in Sport and Exercise Science and was once the Team Sports Scientist for Benetton and Renault F1 teams.
View more posts by Andy Blow

Popular posts from this blog

Why, When, and How to Use A Foam Roller

March 05, 2019
Why, When, and How to Use A Foam Roller OCTOBER 29, 2018 · BY LANCE WATSON While nothing can quite replicate a good sports massage, you can enjoy many of the same benefits at home (or between massages) with a foam roller.  In recent years, foam rolling has gone mainstream. Once a self-massage technique used only by professional athletes, coaches, and therapists; foam rolling is now an everyday practice for people at all levels of fitness. There’s a reason for the popularity of this self-massage technique: it’s simple and it works! With the (usually foam-based) cylindrical muscle rollers now widely available in a variety of designs and firmness levels, there’s never been a better time to start. Here’s what you stand to gain if you haven’t tried foam rolling, and how to do it better if you’ve already started. What is foam rolling? Foam rolling is also called myofascial release. But what is fascia? And why do you want to “release” it? Fascia is the thin tissue that connects our muscles. …
Post a Comment
Read more

December 03, 2018
The Enduro World Series contender reveals his gym formula to gain power, speed and endurance, whether it's on the bike or your own terms. With riding season just around the corner, it's time to get fit. To help you along the way, world’s third ranked enduro racer Greg Callaghan is here to offer his advice – and you should pay attention, because this Dubliner knows a thing or two about fitness. Whether you want to up your bike game for the upcoming race season or just get a bit fitter, simply follow Callaghan's steps (and squats) in the video below to start 2018 right.
https://www.redbull.com/us-en/greg-callaghan-fitness-video

Gym work forms a corner stone on which to build speed and stamina. Mountain biking works the body like nothing else so being fit enough to be able to deal with the stresses and strains of muscling a bike down a hill
Post a Comment
Read more

November 30, 2018
https://www.trainingpeaks.com/blog/best-time-saving-stretches-cyclists/SEPTEMBER 24, 2018BY SHAYNE GAFFNEY We all know that cycling is great for a myriad of things, but the bike keeps your body in a fixed position, sometimes for hours on end. This can wreak havoc on the neck, middle back, hips, and lower extremity muscles, causing them to become shortened, painful, and lose their ability to produce power. This, of course, is unacceptable and the exact opposite effect we want after spending time training outdoors, or in the pain cave! So, do yourself a favor and spend a few minutes stretching your legs out after you beat them up—your body will thank you, and it will give you some precious time to think about life (i.e. more cycling) for a while. The following stretching routine is designed for athletes who are time-crunched and need to really maximize any time dedicated to their fitness. The RulesThe ideal time to stretch statically is POST WORKOUT. Bacurau et al. (1) found static stre…
Post a Comment
Read more